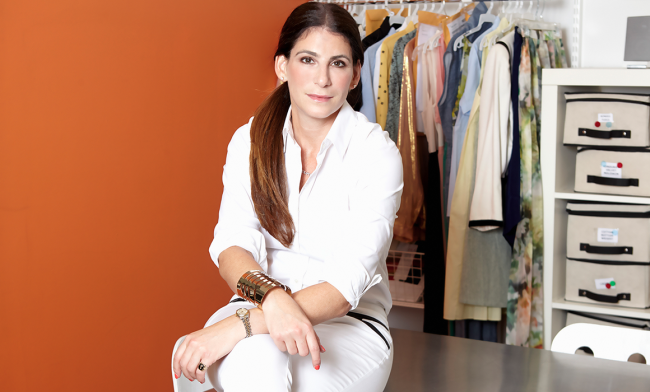 Ten years ago this month, I gave birth to Fabric to Finish. In celebrating this milestone, I’ve decided that the timing is right to start a blog in which I’ll be giving you my insights and a behind-the-scenes look at the product development and production process and all that it entails. Each month, I will share stories, photos, and tidbits of our day-to-day life. But if you cannot wait until then, I invite you to follow us on Instagram, Twitter and Facebook for your daily fix.

In this first blogpost, I wanted to share my personal story of how Fabric to Finish came into existence. It was conceived during a heartbreaking period for me.  I was working for a French luxury childrenswear brand and had just returned from a two-week business trip to SE Asia when the company was abruptly shut down.  We were told that the U.S branch office would be closing.  That very day.  On the eve of the Fourth of July holiday.  Well, how’s that for a welcome home?  Sacré bleu!

Clearly this was very distressing news for me just as it would be for anyone who suddenly lost their job and was told to pack their things and go home.  I really loved working there where I was heavily involved in denim wash and wet processing, but now was given an unexpectedly long summer vacation.

As I struggled inwardly to determine my next career move, I had an epiphany:  I’d go to the fall fabric shows in Paris so that I could stay on point with the trends, keep up my industry contacts and network.  When I told my plans to my BFF/B2B mentor, she responded with, “Oh, so you’re starting your own business!  Finally!”  Up until that moment, I hadn’t realized I was starting a company, but clearly I was, according to her.  Hmmm.

My next two big decisions: what to call the company that I’m giving birth to and should it be an Inc. or an LLC?  Decisions, decisions.  One Sunday afternoon, I had a few friends over for a brainstorming session about the company name.  In frustration, I said, “You know, guys, I’ve handled everything from fabric to finished garments,” and in that very moment my friend shouted out, “Fabric to Finish! That’s it!” The very next day – September 11, 2006 – Fabric to Finish, Inc. was born.

Throughout my journey of starting a company, I experienced some (symbolic) morning sickness.  I had a tremendous amount of nausea for the unknown.  As an employee at a big company, at least I knew when I’d be getting my next paycheck and that I’d have medical benefits and other work perks.  Now, nothing was guaranteed.  I was on my own, I had no job security and I was entering into unchartered territory.  Along with that came those initial labor pains of trying to focus my business plan. Ultimately, I was to give birth to a company that specializes in product development and production management for the independent and emerging designer.

I booked my plane ticket for the Paris fabric shows but finding affordable accommodations so late into the game proved more challenging than expected so I went with Plan B and rented an apartment. (NB: Pre-Airbnb days!)

I decided to celebrate my new business with a cocktail party at the rental apartment and sent out “Save the Dates” to fabric vendors, industry colleagues and people with whom I’d worked at notable brands who I knew would be in Paris at that time. The day before I was set to fly, the apartment rental company dropped a bomb on me:  they’d made a mistake.  The apartment I had put a deposit upon was not actually available, so they sent me a list of other properties to review.  All of the alternative choices were awful, except for one – a duplex with a spiral staircase and a terrace overlooking Notre Dame Cathedral – and it was double the price. I applied the sharp price negotiating skills that I’d learned in the industry and persuaded the rental company to give me the new apartment at the price I would have paid for the original one. Another labor pain well worth the agony.  Bon voyage!  Here I go… 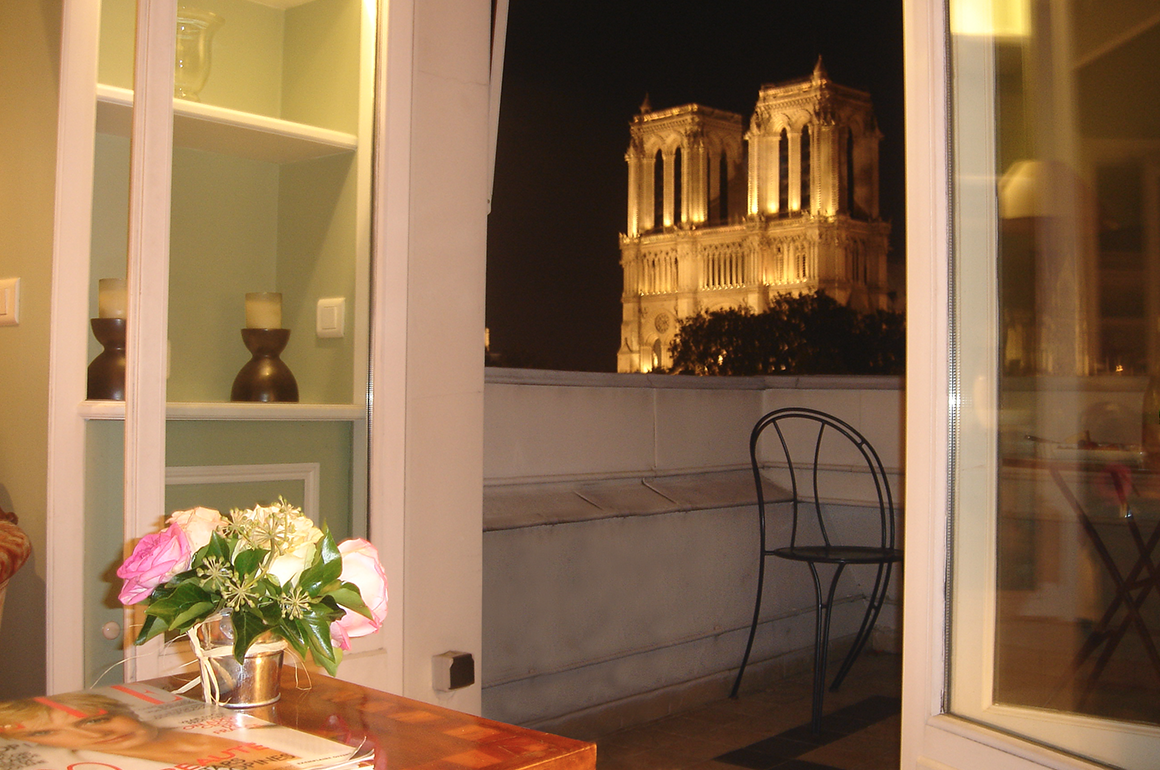 Upon arrival in Paris, the most incredible thing happened to me and, to this day, I know it was b’shert (i.e.: kismet).  I was walking down Rue de Lille near the Musée d’Orsay where I happened upon a familiar silhouette in the distance with his trademark look:  vibrant gray ponytailed coif, aviators, high neck white collar dress shirt, stacked heels and leather driving gloves.  It was Karl Lagerfeld.  He was photographing Diane Kruger who was posing in the middle of the street with a quilted Chanel bag for an upcoming ad campaign.

What were the chances that I’d cross paths with this legend, get to watch a Chanel photo shoot live and in the flesh on the very same day I arrived in Paris to launch my business?  I couldn’t pass up the opportunity to meet him, so I stuck around, and, in my intermediate-level conversational French, I was able to convince one of his many “squad” members to allow me a personal meet and greet and photo op before they whisked him away…  (Cue the church choir:  Hallelujah! I can die and go to heaven now!) 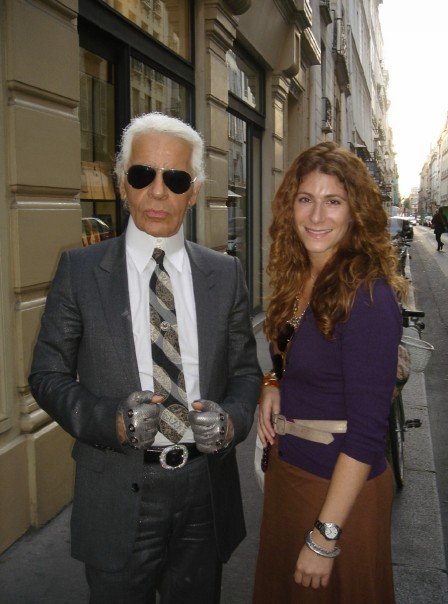 I balanced attending the trade shows with making party preparations. I picked up food supplies at the charcuterie, boulangerie, fromagerie, patisserie (and every other store in Paris that ends in “erie”) to prep for my baby shower — I mean, launch party. I picked up fresh flowers, wine, and champagne. I displayed my denim portfolio atop a trunk in one of the rooms so that my guests could peruse it during the party. I wanted those in attendance to take me seriously as a business woman. For ambiance, I set up the Bose speaker that I lugged from New York, and, as the icing on the crêpe, I put together personalized gift bags of Richart Chocolates for each guest which included my new business card and a thank you note.

The party was a lot of fun and would eventually prove to be a huge success. Two months later, I signed my first client – Diane Von Furstenberg – whose design and product development teams happened to be in attendance at my party (and whose Creative Director I caught glancing at my denim portfolio during the soiree)! Boy, am I happy I schlepped that with me across the pond! It was more evidence that the duplex with the terrace overlooking Notre Dame was well worth the trauma of losing the first apartment.

I was fortunate in my career to have worked for some really notable names like Tommy Hilfiger, Sean John “Puffy” Combs, and even “Ms.” Lauryn Hill, but this was DVF! A womenswear legend. A princess. A force. An industry game changer. She was actually someone who made me nervous in the knees. Every time I had the honor to be in her esteemed presence, I realized increasingly that this was who I wanted to be when I grew up. #fangirl

But I wouldn’t be working for Diane, per se. I would be working with her Creative Director, Nathan Jenden, and managing his inaugural Ready To Wear collection. (Talk about giving birth to someone else’s child…) Coming from the world of price point fabrics and basic sportswear garments, I was airlifted into luxury fabrics and couture finishing. I learned from one of the greatest artists – Nathan himself – how to build and construct a finely made garment. Then I had to manage getting all of it made for the runway and for the store orders, season after season. Working for Nathan, I found myself bouncing between NYC, London and Paris.

What an unbelievable stepping stone it was to have the DVF organization as my first client out of the gate! But as a result of being so heavily entrenched in Nathan’s collection, I was unable to really establish my original business model: a full service, multi-branded consulting firm. So I rented office space and set out to make that happen.

Given my expertise in denim wash and wet processing production, I identified nationally recognized brands and reached out to them to see if I could help improve their denim production or fabric choices. I was surprisingly met with closed doors. But that timing also coincided with the onset of the global financial crisis. The recession forced me to pivot to find my next clients and I thought that the biggest impact I could make was to do sourcing, product development and production management for independent and emerging designers. I felt that I could best capitalize on this space since, clearly, the big companies were not so welcoming. Even though I was swimming upstream against the current, I found that there were more and more entrepreneurs coming out of the woodwork and I had to engage them, one by one. I did then and I continue to do so today.

Now I am the proud mother of a thriving and successful business and, in a certain sense, we’ve become the nannies for other people’s babies—I mean, businesses. Reflecting back, I cannot count the number of sleepless nights I had – whether it was because of my fear of screwing up or simply the late nights at the design studio working for someone who was both a creative genius and inherently nocturnal.

Where we initially set forth to manage only product development and production management in the sportswear apparel sector, we have since added full service design management, technical design, branding and web development services to our company roster. In addition to covering apparel, we’ve expanded to include pet products, accessories and activewear. As we look forward to entering our tween years, we will continue to grow and expand in this same capacity. In the meantime, we have a few goodies up our sleeves that we will share with you as they unfold so stay tuned!

As I reflect upon the past decade, I’d like to publicly thank everyone who supported me and Fabric to Finish, and, in particular, I’d like to recognize the following individuals who deserve special acknowledgment. First, my BFF/B2B mentor Julie Copeland, who, in simple terms, told me that I was starting my own company and then subsequently guided me so diligently along the way through my ups and downs. To Bubbles Bott (and Herman Bott, of blessed memory) who both not only helped catapult my career at Tommy Hilfiger, but also coached me ever so gently on how to jumpstart my business and get on this crazy ride ten years ago. To Tommy Hilfiger who enabled me to discover and recognize my own entrepreneurial tendencies after being part of the incredible team that helped launch several of his successful divisions. To Darren Peck and Erica Okone who helped brainstorm my super amazing company name. To my parents Lois and Allan Koff (also of blessed memory) who, surprisingly, wouldn’t permit me to go to fashion school and insisted that I get a proper liberal arts education. Thank you for not allowing me to do that because, as a result, I’ve had to work harder for my success in this industry. To my employees, my interns, my vendors, my clients and my other close family and friends: thank you for believing in me, thank you for trusting me with your babies (businesses) and for all your support. I look forward to our continued joint partnerships, all future ventures, and to celebrating with you our 20th anniversary in 2026!